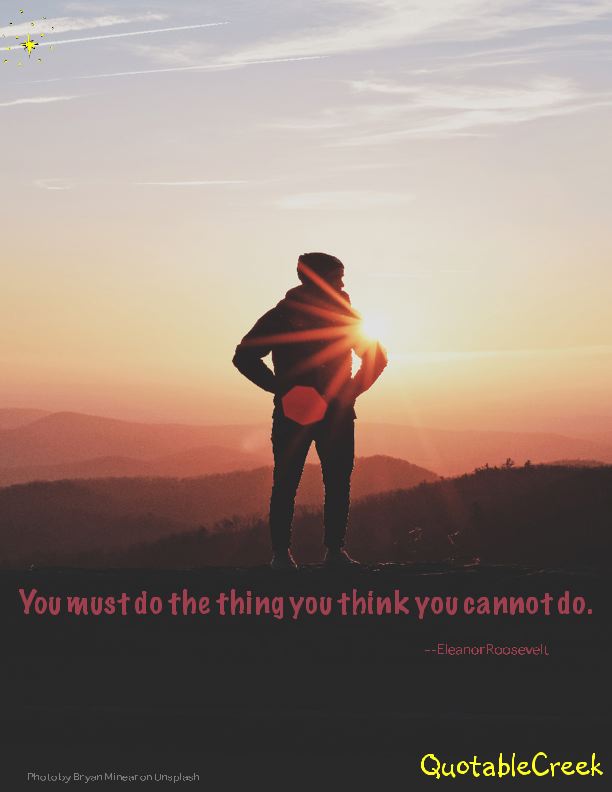 Standing up to fear changes a person. It helps you to put matters in perspective. Where once fear loomed over you, insurmountable, now you can honor the courage it took to move past it into unfamiliar territory.

Eleanor Roosevelt was a courageous woman. Despite her husband’s attempts to placate the South, she regularly bucked segregation and was a vocal proponent of civil rights. She was able to call out racism and force others to see it for what it was:

By 1939, ER decided to attack the hypocritical way in which the nation dealt with racial injustice. She wanted her fellow citizens to understand how their guilt in “writing and speaking about democracy and the American way without consideration of the imperfections within our system with regard to its treatment . . . of the Negro” encouraged racism. Americans, she told Ralph Bunche in an interview for Gunnar Myrdal’s American Dilemma, wanted to talk “only about the good features of American life and to hide our problems like skeletons in the closet.” Such withdrawal only fueled violent responses; Americans must therefore recognize “the real intensity of feeling” and “the amount of intimidation and terrorization” racism promotes and act against such “ridiculous” behavior.

You can’t clearly see a problem before you if you are too scared to look at it and call it out for what it is.